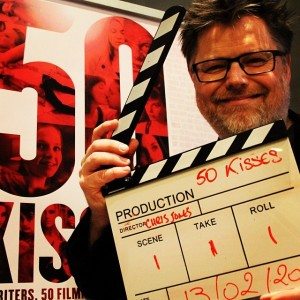 ‘50 Kisses’, the first feature film from The London Screenwriters’ Festival, is premiering on February 13th in London.

Two years ago I realised that it wasn’t enough to run an annual event for screenwriters, we needed to be active participants in GETTING SCRIPTS PRODUCED. And so 50 Kisses was born. The agenda was simple. 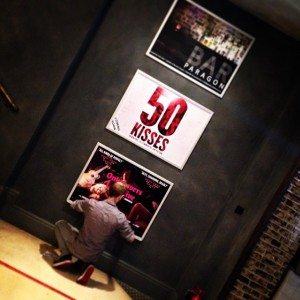 If you have been following the project, you will know that all of these goals have already been achieved – Hollywood deals have been made, low budget features are in prep, writers are in new relationships with producers, writers and film makers are looking at their glasses as being more than half full now. It’s extraordinary. But I still want to achieve even more for everyone involved.

Collectively, we have done something AMAZING!

As one writing and filmmaking friend Kristi Barnett commented on Facebook, ‘This is a unique, unprecedented way to get a film made and best of all it utilizes the talent of up and coming screenwriters and filmmakers.’

As film journalist Dominic Welles commented in his review… ‘it’s like Love Actually, only much more real and affecting… I was blown away’ 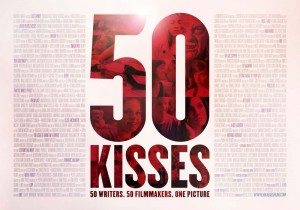 And so filmmakers, writers, cast and crew, your friends, your family… I invite you to attend the red carpet premiere this Thursday, to celebrate in style…  and finally, to be witness to ONE FINAL EXTRAORDINARY REVELATION for 50 Kisses. I will announce this on stage before the film plays. It’s a BIG deal for everyone involved. A REALLY BIG deal.

Finally, 50 Kisses has taken us all on a journey. Many have fallen by the wayside, the marathon being just too long and arduous. Some have remained at our side for every step, often helping us carry and drag others to finish line.

I salute you all. Success lies in taking action. MASSIVE ACTION CREATES MASSIVE SUCCESS. And 50 Kisses is the result of MASSIVE action from an incredible community of emerging talent.

So once more, I invite you come along and be a part of history of February 13th.

Your number one fan

50 Kisses on BBC WM Radio with Noreen Kahn
50 Kisses Final Mastering: Making The DCP Part 1
How much pain are you prepared to inflict?
Why If you are an actor/actress I recommend making your own work
Singer / songwriter / composer initiative for 50 Kisses closes next week
Something for the weekend? Screamography with John Landis
A Valentines Love Letter Video to Everyone Involved in 50 Kisses