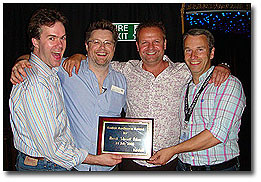 So the dust is now settling on the Kodak Awards, and already, sights are being set on the next big event, Rhode Island, just north of New York, next Tuesday night. But for now, some reflections and thoughts on last weeks exciting events. (Pic right shows Eddie Hamilton, me, Ivan Clements and 2nd unit Dir, Simon Cox)

First off, I want to thank everyone who came and voted, YOU won the award for us all. And it was a terrific example of people power. I have asked for a breakdown of the votes, but I don’t think I will be getting it (if I do I will post it). Over the next few days I will also post a considered entry about the state of British Short film making, and the Film Council. But for now, let’s enjoy the awards and success. 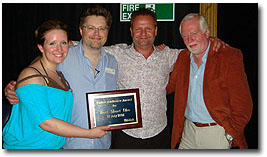 It was important for us to win this first award in our home country, as it proved that the audience, the people for whom I made this film, cared and counted. It also a wonderful and prestigious start to our festival circuit, and of course, the race for the BAFTA’s and the Oscars early next year. (pic right shows Production manager Steph Wrate, me, Ivan Clements and DP Vernon Layton)

On the evening, it was really great that Paul Andrew Williams, director of the hugely successful ‘London to Brighton’ acknowledged The Guerilla Film Makers Handbook on stage by saying, ‘If it wasn’t for Chris’ books, I would never have made the film…’ To know that you have helped in some small way, to get a film like London to Brighton made, really does make it all worth it. So thank you Paul for such wonderful words. I was also delighted to find out that second unit DP on Gone Fishing, Liam Landoli, also collect a DP award for another film – good on him!

Since the award, we have had more hits on the blog than ever before, over 500 a day, which is awesome. I have also received a huge amount of congratulatory emails, which has been wonderful. Thank you.

And don’t forget, if you want a signed poster, you can get them here… (only a few left now, and I am delighted to report that the sales of the posters have almost covered the cost of getting them printed).

50 Kisses HUGE Box Office Success... The numbers are in!
Meet The Nativity Wins 'Best Festival' Film at 22nd Jerusalem Awards at BAFTA
Video Postcard from the 50 Kisses Premiere
The London Screenwriters’ Festival to receive £42,015 from second round of the Government’...
Gone Fishing at the Kodak Awards, 2008
Kodak Awards Feedback and thoughts…