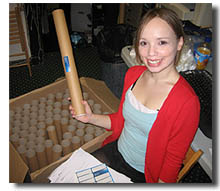 Finally, the postal tubes for the posters arrived – at the same time as the newest member of Team Living Spirit. Catherine Balavage, pictured here, started today. Hoorah! After being asked why she thought it was a good idea to get cramped into a tiny, overheated, noisy office, her answer was simple… ‘I wanted to be part of the team who made it to the Oscars!’ We like Catherine. She is also a writer and talented actress (she just starred in The Wolfman, $25m remake of the Universal classic, shot at Pinewood Studios), and I am hoping that her wee Scotts accent will help charm some more support out of sponsors.

So one of the jobs today was to get the posters that we had printed and signed, off to the people who bought them – which we did, in a very organised production line. We still have a few signed posters left over, signed by me, Editor Eddie Hamilton, Producer Ivan 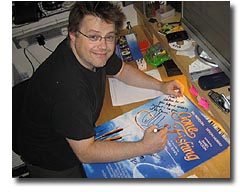 Clements and DP Vernon Layton. So far we have just covered the costs of the printing by selling these posters, but we are still on a funds drive, now the Oscars bid is underway. So now is your chance to get one before they get sent off to festivals.

If you want to buy one of the last few signed posters, you can get one here.

How to organise, run and host a successful film premiere: Top 21 Tips
Gone Fishing on Korean Fishing TV channel!
50 Kisses HUGE Box Office Success... The numbers are in!
Top 13 Things To Do When Being Interviewed for Radio About Your Film
Who is in your crew? A guide to low budget film crews
Interview on Spolier Alert Radio
Starting the film sales process…