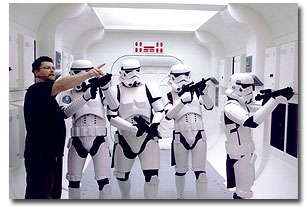 Since we began our Facebook campaign a day or two ago (which is going very well, so please keep up the energy), I have had a pile of emails about the photo that I have on my Facebook profile. This was taken last year at a Star wars Expo event in central London where I spent a day on stage explaining how movies get made, with particular reference to Star Wars of course. I originally wrote about it on the blog here.

The event ran twenty times or so during the day, and each time it began by plucking out a few members of the audience, getting them into costume, filming them on the set, then editing it into the movie and finally premiering it there and then – all in ten minutes! It was tremendous fun, and all my Star Wars mates turned up in order to be ‘randomly’ plucked from the crowd and inserted into their favourite movie!

Unknown to me at the time, lots of people were filming it and a bunch of clips ended up on YouTube. Below is a clip that gives you a real feel of what is was like to be there… But really, for Star Wars geeks only. Pass the popcorn!

The Guerilla Filmmakers Masterclass: The Final Chapter... Come for just £69
Super Hero Training Day For The LSF Team
Guerilla Filmmakers weekend masterlcass a success!
Gone Fishing plays the LA Childrens Film Festival
Getting the posters out into the community