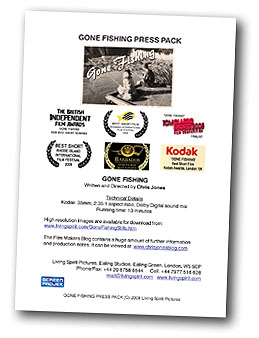 We are in the throes of updating and reformatting the whole ‘Gone Fishing’ press pack. What we have is great, but it’s a little outdated now, and also, now I have been out there in the world with it, I can see how we can improve it.

The big thing I have found is that journalists will no longer carry very much around with them. So it all needs reducing. The plan is to have three basic versions.

1. A business card which directs the person to a special and ‘press only’ website. One URL and you are there, everything at your finger tips. That’s of course the lightest one.

2. A USB memory stick with press pack, photos and clips on it. Small but expensive for us, so it will be reserved for the best opportunities (If you know any where that we can get 50 – 100 256mb USB memory sticks for free, that would be great – we are happy to have a company logo on it as a sponsor, and we will put our own sticker on the other side)

3. A double DVD case with the movie on DVD, a press pack on CD with stills and clips, and a micro reduced paper print out of the press pack that will fit inside the DVD case neatly. The case will have a DVD cover with the words PRESS PACK emblazoned across it – this has the added advantage of being ‘packaged’ where most of the eye catching good stuff is on the outside of the box. It’s shiny too and everyone likes that!

All of this needs to be completed and in place by the second week of January. As an added thrill, we also find out about the BAFTA nominations on January 15th, and if we are lucky enough to get nominated, it’s the awards on February 8th! You can watch a video of the BAFTA’s from last year below…

We also just got news that we are in a very high profile film festival, but until it’s announced, I can’t say which. But they did send a terrific PDF with lots of tips for making a press pack… here are some of their highlights…

PRESS PACKS
1) Press release (include the 5 W’s: who, what, when, where, and why if available)

2) Background on the story, any press clips on the making of the film, or related articles

4) CD including headshots of the director, producer, writer and principal cast. Also include stills from the film, with a print out of the photos on the disk (in icon size) including captions for the photos and photographer credit. 300 dpi, no larger than 4”x6” format

5) CD of soundtrack of the film (if available)

7) Try and make the cover of your press kit unique. Remember you’ll be in a filing system with many other film titles the media will be looking at. All press attending the Festival like to have a press kit on the film they are seeing.

Gone Fishing on Korean Fishing TV channel!
50 Kisses HUGE Box Office Success... The numbers are in!
How to organise, run and host a successful film premiere: Top 21 Tips
Top 13 Things To Do When Being Interviewed for Radio About Your Film
Stacey Parks, Distribution Guru, FREE PODCAST!
Gone Fishing at Christmas…