What a GREAT DAY! Amazing. I knew that the ‘EXAM with film makers autopsy Q and A’ would go down well, I just didn't realise how much people would respond to it. I have been to lots of Q and A sessions after films and often found them a little light weight. I wanted this session, we which we hope will be a part of an ongoing series, to be indepth, honest and above all, practically useful for film makers. So I drove the questioning hard, away from the usual fluff and right into script development (remember we emailed the script in advance so film makers present could have a more complete experience), through story in post production, and rounding off with sales and distribution, which is what I know most people found fascinating and useful. 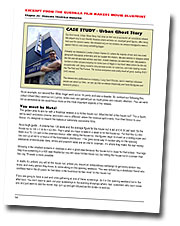 So, I began the event by discussing the importance of getting people to a theatre on the opening weekend, so that the film makers could maybe hit the house nut – and I handed out this flyer (PDF Download here), a slightly modified page from my book The Guerilla Film Makers Movie Blueprint, explaining what the house nut is and how it’s calculated.

EXAM's box office has been hit hard by a double whammy – first is James Cameron's 'Avatar' doing in excess of a billion dollars of business and hogging every digital screen in the known universe (EXAM is released digitally and was pulled from three screens this week, screens that were handed back to 'Avatar'). The second thing has been the snow. Even the guys at the box office in the Odeon commented that this was about the worst weekend they could remember. So it’s a stark reminder to get out there and support the films you want to support, as soon as you can and not next weekend – your ticket really does count!

Even though it was a tough week, you will see that with the help of this screening, WE MANAGED TO GET ‘EXAM’ TO BE THE TOP PERFORMING FILM AT THIS CENTRAL LONDON CINEMA! ALMOST TWICE THE BOX OFFICE AS 'BRIGHT STAR' AT NUMBER 2! RESULT! Below is the report from EDI detailing the box office and you will see EXAM there in the number one slot! Wheyhey!

Just one moment whilst team Living Spirit pats themselves on the back. And if you were there too, just take a moment to pat yourself on the back too – it’s YOUR EFFORT that has put EXAM in the number one slot.

UPDATE – EXAM is officially being held over for another week at Panton Street! This is EXACTLY THE RESULT WE NEEDED! THANKYOU!

We did video record the 90 minute session after the film and that will be appearing somewhere online in the near future – watch this space for more details on that. If you want notification about that, or of other screenings and events, join our newsgroup here. 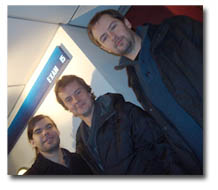 I want to say a big thank you to Stuart Hazeldine, wirter and director for EXAM. I have interviewed lots of film makers through the writing of The Guerilla Film Makers Handbook series, and many chose to be economic with the truth – I understand why of course, but that doesn't always help those reading or listening. But Stuart was very candid and courageously honest – and so we all owe him a debt of gratitude for sharing what he knows and what he has learned while making EXAM.

Hey that was just fantastic today. Once again thanks so much for all your effort and passion. I'm sure the future success of a number of budding film-makers on your contact list will be in no small part due to your unselfish efforts to inspire and equip.

I thought the film was really quite excellent. I must admit I was dubious that any movie contained entirely within a "classroom" would hold my attention to the end. It did – and more.

Stuart and his team did a masterful job of keeping dialogue fresh, ideas new, tension alive and basically hooking the audience in so strongly and emotively to wanting to know the answer (and the question), (and the answers to all our other questions) that I think that there might have been a small riot if the conclusion had not been satisfactory! It was immense.

The Q & A was equally excellent. I actually sat there more than once thinking how cool it was to have just watched a film and now be listening to the creators sitting on stools at the front of the theatre talking about the process and answering questions. It was like a 2-disc edition movie DVD with Behind the Scenes features – only live!

Practically it provided valuable insight. Emotionally, it motivated and encouraged. It was a total triumph.

Thanks again for providing such great opportunities to get skilled up and perhaps more importantly in making me feel part of an industry / fraternity. You're helping keep my dreams alive.

EXAM: Meet the filmmakers, read the screenplay...
50 Kisses Final Mastering: Making The DCP Part 1
LA Screenings Video
How To Write For Hollywood And Live In The UK: Podcast with Stuart Hazeldine
'Swinging With The Finkels', Inspirational Script to Screen with Jonathan Newman
From the archives... Script to screen on EXAM, with Stuart Hazeldine
Empire reviews and feature are in for EXAM… and it’s a Pass With Distinction… and your last chance to get tickets for special film makers autopsy on Sunday afternoon
Gone Fishing on Korean Fishing TV channel!