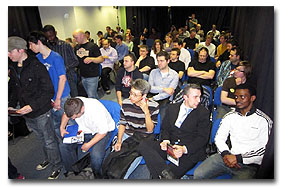 Over the last few weeks we have held two separate ‘Script To Screen’ events, one for zero budget horror ‘Dead Wood’ and one for the hundred grand Microwave feature ‘Shifty’. Both events were very different, were very well attended/received, and ended up with over 150 film makers getting enormous insights into the development, production and sales of these films.

First up was ‘Dead Wood’, made for pocket money, shot over several years and sold to Lionsgate in the USA. Sebastian Smith and David Bryant took the stage with me for a robust and very entertaining couple of hours of frank, intimate and often, rip roaringly funny chitter chatter about how they made the film. The boys were the epitome of ‘we have no resources and no money, so let’s take charge of our destiny and make our own mistakes on OUR journey…’ 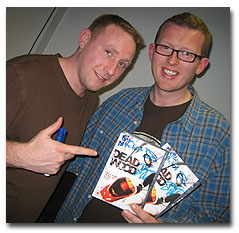 It was inspiring stuff, and many people in the audience had that ‘light bulb’ moment when they made their own personal choice to stop procrastinating, planning and preparing, and take that big first step on their own journey to make a film. Reading the script and comparing the film was a real education too – even though they themselves thought the script was good, when they took it to set it was re-written hastily, and then into post, it just all fell apart. But their commitment to excellence drove them through what must have felt like endless reshoots in pursuit of the best movie possible out of their limited resources.

What was also impressive was just how much production value they squeezed out of their Canon XL1’s on which they shot the film (no Canon 5D MkII was around when they made the film). This ‘look’ was achieved through extensive grading and visual effects in After Effects and other post production packages. But it was the time and effort invested that made it work, not the tools alone. 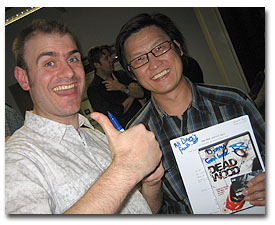 The boys infectious energy must have rubbed off though as during the break an enormous line of people queued up for them to sign DVD’s and scripts. If energy, passion and enthusiasm were the only indicators of success, the Dead Wood boys would surely be in the running for an Oscar. And I think that’s what everyone in the room picked up on, and frankly, we all wanted a piece of that love!

Great, great, GREAT! If you missed this workshop, it will be online in the near future, so sign up to our mailing list here and we will let you know our plans for it as and when it’s live.

Flash forward… Last Sunday at the Odeon Panton Street, we held a second Script To Screen workshop with Eran Creevy and Ben Pugh, writer/director and co-producer respectively, for ‘Shifty’ – a day in the life of a crack dealer in London.

As I said to Eran on stage, on paper, ‘Shifty’ is not my cup of tea, but because Eran wrote from personal experience, with a deep love and affection for the characters and the world of the story, the whole film felt honest and won me over within a few moments of it starting.

For me it’s a near perfect micro budget film. Nothing is weak. Script, cast, locations, props, editing, music… all pulled off with style. His script is also a wonderful lesson in minimalism – every word drives forward the narrative. New writers should really give it a read. 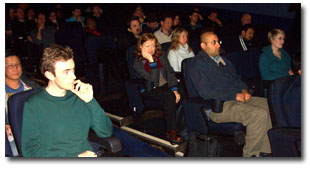 Eran is also a genuine charmer. Everyone present was won over by his self effacing honesty and self imposed tough love in pursuit of excellence. So many of us could learn huge amounts from his attitude, let alone his skills as a film maker.

The Q and A session was superb too and it was great to hear so many considered and thought provoking questions from the packed theatre.

Eran also spoke about the need to really understand the ‘universe’ of your story. Every director works in their own unique way, but they also understand the characters and world on such a deep and profound level, that any creative question can be answered in a heart beat. This he felt was crucial.

Listening to Ben and Eran chatting, it was clear to everyone present that their success is partly down to individual excellence and talent, but largely down to collaboration in a healthy and productive way. It was clear that Ben could reign in Eran’s creativity, and Eran could push Ben as a producer, but this was always done i
n a positive way. 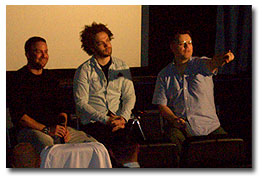 All in all a fantastic success.

Here’s some comments I received over email about ‘Shifty’‘Leading up to the event I was sent a copy of the original shooting script and pitching notes that were used in order to secure the production of "Shifty". It was insightful to have gained this type of access to these documents prior to the event because it opens your mind up to what might have been required in order to complete the film.

After the film was the Q & A with Eran and Ben which was hosted by Chris Jones. This was the best part of the event for me… It was brilliant! There was a prize draw for two audience members to win posters for "Shifty" which Eran signed. I also got my script and my "Shifty" DVD signed by Eran which he was more than happy to do. Legend! Both Eran and Ben were absolute top blokes and were happy to chat to anyone, which to me was pretty amazing… then to the pub across the road from the cinema where everybody met, exchanged cards and information and yes, Eran and Ben came with us and had a drink (or two). The end to what I would call a superbly helpful event. Cheers Chris. And many thanks to Eran and Ben.’
Mark J Thomas

‘The SHIFTY Script to Screen event was invaluable. It's always good to hear people's film making experiences first hand, and these guys (Eran and Ben) were very candid. It was great for networking too, as I got talking to some other film makers afterwards that had also attended, and they're now considering me for a role in their next feature’.
Ben Shockley-Actor/Writer.

‘A great film followed by a fantastic Q&A. Eran Creevy was extremely generous and honest in telling us his journey from script to screen. To see someone like him making it was quite inspiring as he came across as a really genuine good guy. Having producer Ben Pugh in the room was an added bonus as it highlighted the importance of a strong creative team. A very illuminating afternoon, well worth it!’
Don McVey (writer)

‘I can't thank you enough for making this event happen – Eran is a true inspiration and I'm so glad to have been in his presence today… I found this event was very well organised, the atmosphere relaxed / friendly and the length of time spent at the Odeon was just about right (although it would have exhausted them, I could have listened to Eran and Ben for at least a couple more hours :-)  I was particularly impressed with how the questions were structured which provided me with a useful overview of Shifty’s journey from concept to distribution. This was one of my main reasons for attending… I am truly grateful for both Eran and Ben's generosity in taking the time to answer my questions. All in all – this was an outstanding event, I've already begun spreading the word and look forward to receiving details about the next one…' Dee, Film Maker

'Excellent afternoon. Very good choice of film and makers something we can all aspire too. Also think the network aspect afterwards is a great opportunity to meet other like minded people, which we seldom do working on our own individual projects. Looking forwards to the next.'
Chrisopher Hughes, Film Maker

A big thanks to Seb, Dave, Eran and Ben for sharing so honestly and passionately. You are all wonderful examples of us all being in the same boat and all rowing in the same direction. Kudos.

How best to be a filmmaker in 2015?
'Swinging With The Finkels', Inspirational Script to Screen with Jonathan Newman
How I Cast Brian Blessed, Joanna Lumley and Jack Davenport in my fantasy short, Guest Blog...
Six Lessons I Learned Making My First Feature
'Welcome To The Punch' writer director Eran Creevy interview about how he broke into the f...
Making 'Ink' with Jamin and Kiowa Winans
Networking in Cannes tip… be remembered
Can you afford to release YOUR film in a cinema and take just £86?