By Chris Jones on April 9, 2010 in Hollywood, Inspiration, Rocketboy, Screenplay 3 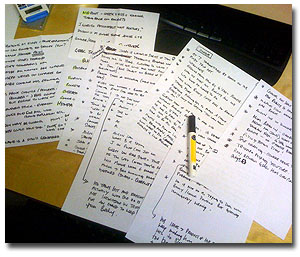 When I am watching a movie that is brilliantly written, it leaves me kind of breathless. Because I know just how much hard work goes into writing a screenplay that breezes along effortlessly, with no friction, without a single scrap of waste, simultaneously surprising and obvious at each turn (‘how is he going to get out of this?… Of course! That’s how’), with wit and pathos, pace and pause for reflection, with characters I relate to deeply… stories where the journey is so touching, moving, exciting and cathartic in was I could have never imagined when I began, that I sit back, exhausted and marvelled by the excellence.

And it’s why I find writing so very hard and so very terrifying. Having made three features and the short' Gone Fishing', for me personally, it’s not worth embarking on a film unless the script is THAT good.

There is just too much pain and heartache to endure on the journey through financing, shooting, editing, releasing and finally judgment on your last work… unless of course, the script is THAT good.

And of course, famously, ‘you can make a bad film out of a great script, but you can’t make a great film our of a bad script…’ So even if you do manage to scribe a terrific screenplay, underfunding, bad scheduling, poor casting, shoddy editing, inappropriate music, even the wrong title… all, and a near million other things, can conspire to mess it up for you.

This is why it is so vital to take your time to write it well, to rewrite and refine, to understand your story and characters at every level. It’s the best way to ensure that all the hard work on your script is rewarded with an excellent movie.

And it’s with that backdrop that yesterday, I returned to the screenplay for ‘Rocketboy’.

I have for the last year been working on and off on a Hollywood film project, which for contractual reasons, I cannot reveal just yet. We will see how that one evolves.

But ‘Rocketboy’… Some of you may recall that ‘Rocketboy’ was the genesis of ‘Gone Fishing’. And now it has come back center stage… And it’s time for a redraft. A BIG redraft.

The photo above is of the notes I made with Judy Goldberg yesterday, our first pass on work that needs to be undertaken now. Why so much?

Well, of course it is in part that pesky pursuit of excellence, but it is also a refining of our hero in the story, and perhaps most importantly, a rewrite with our core audience in mind. So far every draft I have written has kind of been for me. I am a movie lover, and I know that I would love ‘Rocketboy’, and so QED, anyone like me would like it too. That may be true, but it is also a very European ‘arthouse’ view. It’s self indulgent.  I have been writing for too small an audience. Me.

‘Kick-Ass’ last week really sealed this mindset for me.

It’s a movie that totally understands its audience. A movie where the online review by the Daily Mail stunningly illustrates how much some people ‘don’t get it’ on a deep and fundamental level. But that’s cool, it wasn’t made for those people.

‘Know your audience…’ It was also the most important advice my editor friend Eddie Hamilton had for me and the viewers in the video interview I posted on the blog last weekend. You should check it out. And if Eddie offered it as his single most important piece of advice, you know that it’s a big one.

And so that’s why we have so many notes on ‘Rocketboy’.

We are making some major changes to some characters as we refocus, with laser precision, the story to speak more clearly to our target audience.

Wish me luck. Really. Because right now, this feels like both the biggest and hardest job I have ever undertaken.

And remember, we are running a one day workshop ‘How To Be A Great Script Reader’ here… there are only a few places left.

Ray Harryhausen died today... do you remember your first stop motion movie on Saturday TV?
Top tips for directing when you’re the only beginner on set by Kat Wood
Project: Rocketboy... top ten tips for getting feedback on a screenplay
Get a job in Hollywood... detailed insight into the dream factory
Networking With Film Makers… how do you do it?
Kick Ass kicked some Ass! Well done Eddie and crew…
Know your audience… Part 2

3 Responses to Know Your Audience…