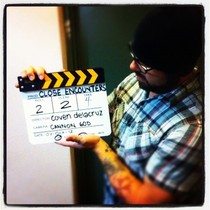 We are now into the final round of 50 Kisses, our crowd written, crowd produced and ultimately will be crowd distributed feature film, is coming to an end.

Films based on the two page scripts are now being uploaded and you can watch, rate, review and feedback here – this process is important as filmmakers have till the end of this month to recut, rescore, remix, possible even reshoot parts of their films. Above is one of the versions of Lonely Heart submitted.

More films are being added daily – we will be posting recuts to the site as and when they come in. Here are my notes for Lonely Heart…

Have your say on the films here http://www.50kissesfilm.com/movies

50 Kisses: The poster designs are in.... which would you choose?
50 Kisses Final Mastering: Making The DCP Part 1
'50 Kisses' achieves a GUINNESS WORLD RECORD
‘50 Kisses’ – have you chosen your project yet?
Get YOUR 50 Kisses Poster Now
What did our delegates say about LSF 2012?
How to recut your movie – mini masterclass in under ten minutes!