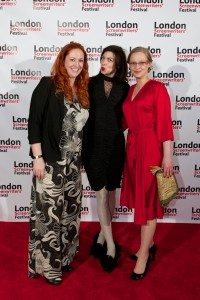 It was a knockout event with red carpet, WamBam burlesque performers, awards, an after party and of course a movie premiere!

First was the red carpet and the opportunity to get your photo taken by our professional photographers.

I knew it would be popular but the line went all the way down the stairs! If you are going to get all dressed up in your glad rags, you are sure going to want a killer photo to remember it – and that’s what we provided. Watch the video below…


As guests entered the venue, we had three burlesque performers from the WamBam club greet them, offering another valentines cheeky photo opportunity.

All this time of course Judy, Maureen and the whole volunteer team were running around, prepping the theatre, arranging awards and making sure everything would run to plan. 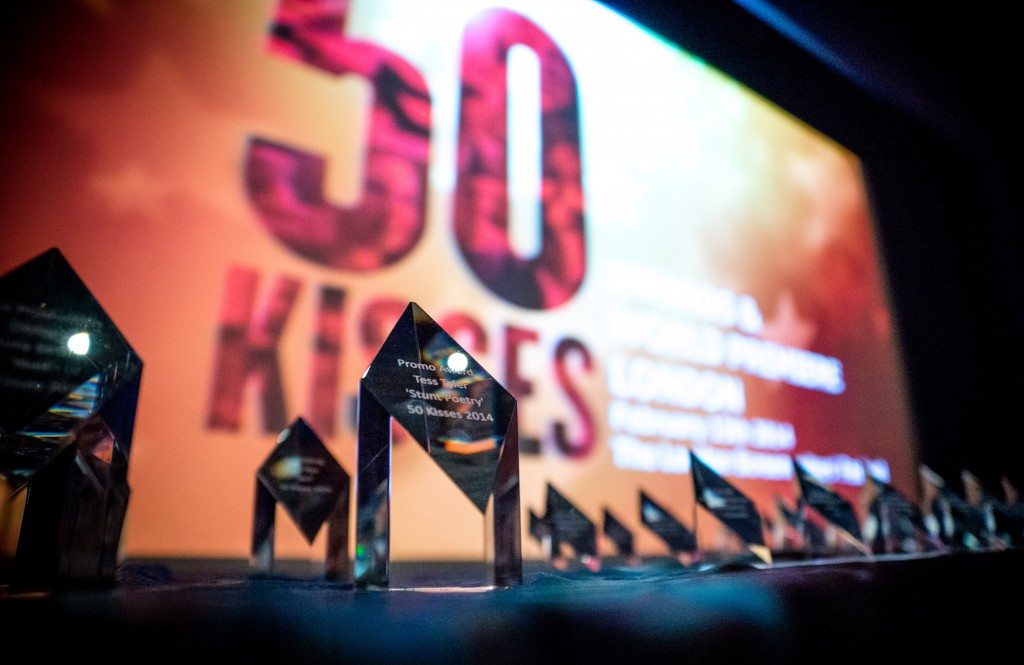 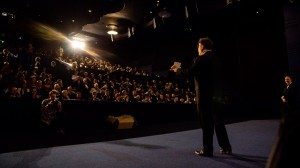 At eight, we all headed into the packed auditorium and with massive anticipation and excitement, the awards began.

I started by recapping the 50 Kisses journey, acknowledging as many people as I could for their hard work over the past two years. And of course acknowledging the talent of the writers, cast and crews of all the films and scripts submitted to 50 Kisses – that’s over 2,000 people! 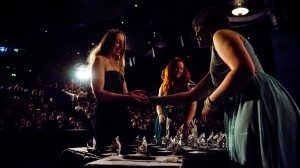 Then the ceremony began, first with the awesome Olivia Hetreed, President of the Writers’ Guild of Great Britain giving all 50 writers an award. Everyone came down to collect their individually engraved glass trophy, something to keep in the loo, or a paperweight on their desk to remind them of this success. On the marathon of writing and filmmaking, even the smallest things to remind you of success can keep you going. 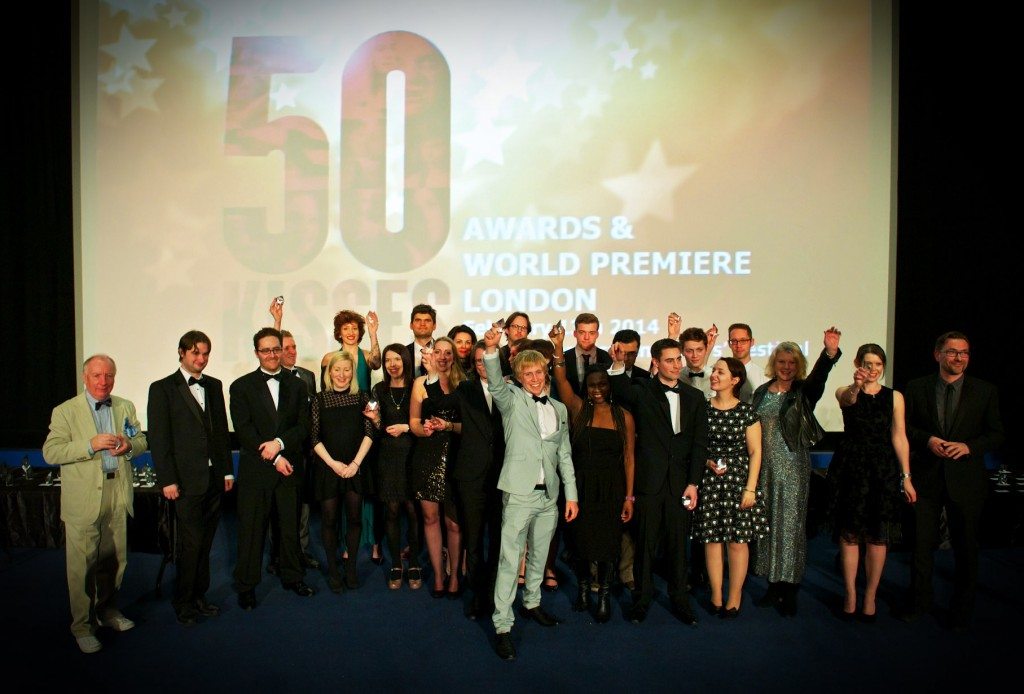 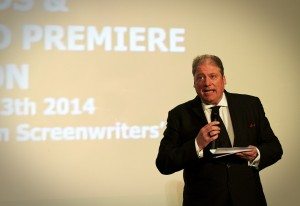 Second came Adrian Wotton, CEO of Film London, handing out the trophies to the filmmakers – we invited the entire cast and crews down to the stage, recognising that filmmaking is a truly collaborative effort.

And if the writers awards was a little hectic, the filmmakers was a rugby scrum! 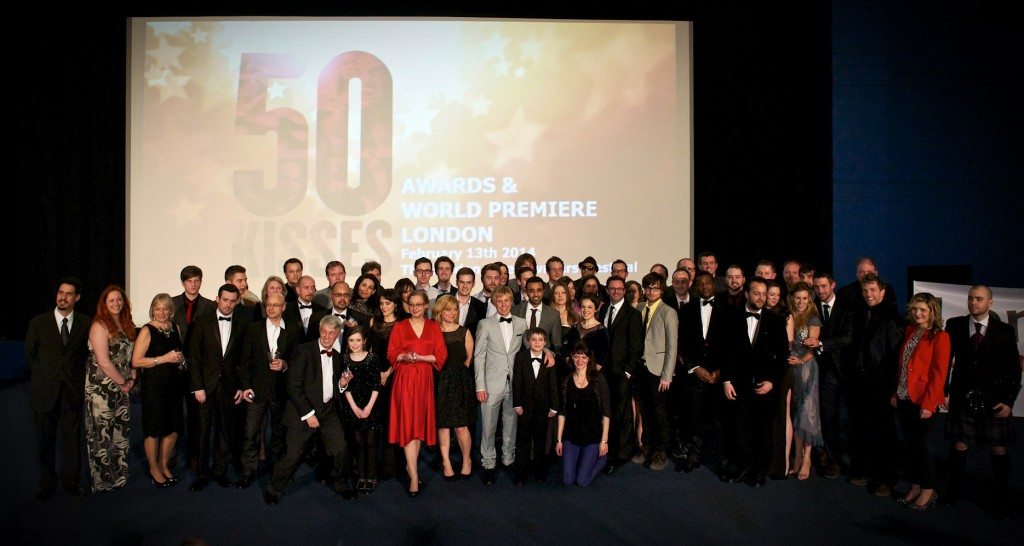 Finally everyone collected their award, photos were taken and everyone was re-seated, in anticipation of the 11 individual awards. 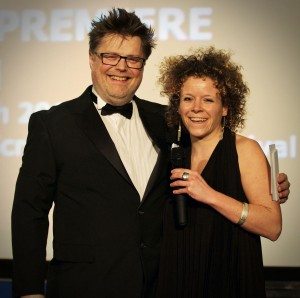 It fell to me to give these awards, and the winners were… 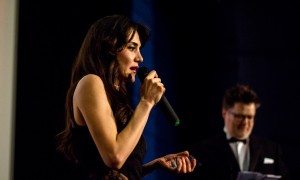 Of the 11 awards, 5 were collected by women, including Staré Yildrim from Istanbul who was genuinely overwhelmed. I noticed the day after the premiere that someone had tweeted that there was a refreshing gender balance among the winners – it hadn’t struck me until that moment. Awesome!

Then it was time for the movie… the lights dimmed, the anticipation went through the roof and we all experienced the world premiere of ’50 Kisses’. 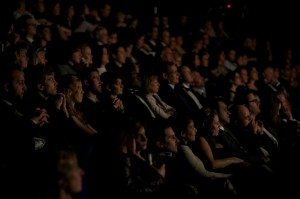 I invited everyone to switch their phones on and take pictures, tweet (#50Kisses) and FB through the screening, as well as clapping and cheering. If ever there was a time to misbehave in a cinema, this was it. And we all did! It was HUGE FUN!

As the 17 minutes long credits rolled, we all reflected on the whole process. 50 Kisses has created new relationships, new experience and genuine opportunities for so many involved. For me, that is the real prize. 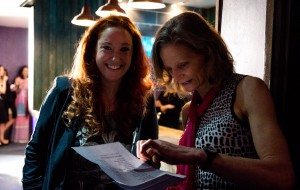 As the team and I had been focused on the event logistics for weeks beforehand, and because the audience had never seen ‘50 Kisses’, we were all a little startled at how 50 Kisses played on the big screen.

It’s a cracking the movie and I was genuinely knocked out by audience reactions. 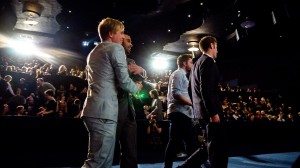 What’s so special about a movie premiere, especially low budget ones, is that it’s a right of passage, it’s not just a glitzy screening, it’s a milestone, a life acknowledgement. On all my workshops I encourage everyone to make these events as big as they can. Demand people get dressed up. Find a killer venue. Put on an amazing show. It’s worth it, not just for everyone present, but for you too.

Votes on IMDB are now being collected… you can vote here http://www.imdb.com/title/tt2249786

And there are several photo packages you can access for your blogs and social media. You can access them all here… http://www.flickr.com/photos/londoncreative/sets/

Next week I will announce what the plans for 50 Kisses will be.

Finally, congratulations and thank you to everyone who made it to the premiere. I hope that like myself, it was a night you will forever remember.

50 Kisses Films Now Being Uploaded... can you offer advice?
50 Kisses: The poster designs are in.... which would you choose?
'50 Kisses' achieves a GUINNESS WORLD RECORD
Top Ten Things I Learned From My Last Film... And the REAL driving force behind it
Near Kisses for 50 Kisses
A Valentines Love Letter Video to Everyone Involved in 50 Kisses
Video Postcard from the 50 Kisses Premiere