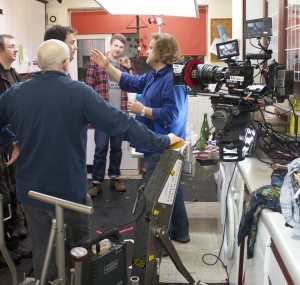 The whole thing started when I was having a pretty dire Christmas alone and I’d just got a twitter account and I tweeted, all I want for Christmas is a producer to make my film.

Within 24 hours I’d had a tweet from Andy Carslaw who was initially interested in directing the film, I sent the script to him and he came back to say he loved the script but thought that because of the subject matter it might be difficult to get someone on board as a producer so he thought I should produce it myself.

I thought – why not?

So, I talked to my new best friend, Google and did some searches on the web to find out how you produce a film.

So I went on the course, it was an intensive two very long days, up early and to bed late, complete information overload but I came away with everything I needed to be able to produce the film. Most of the other people involved were also people who responded to my tweet.

However the next guy I found to come onboard was Ian a local lad. I met him in Game where he was working. I was there selling all my electrical goods to put towards the film budget.  We got talking and I convinced him to come on board with making the film.   From that we just built a strong team of people who really believed in the film script and the subject of the film. 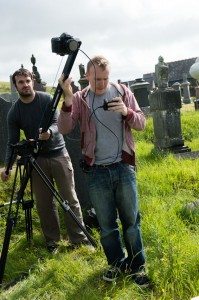 I raised as much as I could initially, personally. Then I ran a crowd funding campaign on Sponsume through the website and twitter. It was really hard work but it was worthwhile because it covered some vital costs of the filming. As well as promoting the film. I know

I was a bit of a pain and some friends stopped following on twitter because they were getting a bit sick of me constantly asking for money even though they’d already give me some money but luckily once the campaign was over they did start following me and talking to me again! A film company Chen Noir contacted me to say they wanted to be involved, we went to London to meet Brandon Smith and he asked how much money we wanted but instead of taking that offer, because it involved signing over more rights than I was willing to give. Instead we asked for him to come on board with his marketing expertise and as a co-producer, which he agreed to do.

The whole process, just getting to the shoot was like putting together a huge jigsaw, and you didn’t know if you had the right pieces or if they would fit until the first day of shooting.

First day of shooting, I was so excited. Surely nothing could go wrong now?

How wrong I was. The very first hour of shooting was a disaster for me personally because on the way to set at 8am, we were heading over in the car to my friends house where we were filming I was so nervous I was desperate for a wee. We stopped at a farm to ask if I could use the toilet and the farmer insisted they didn’t have one but I could go behind the bales in the field.  I climbed over the gate and fell face first into cow slurry.   When I eventually arrived, late, on set for the shoot I was covered from head to foot in cow dung luckily my friend said I could have a shower and borrow some of her husband’s clothes.

Post-Production was a nightmare. We had to do all the post ourselves, so it was new ground for pretty much everyone on the film, back to my friend Google, Oh and the fantastic Blog by Danny Lacey. All of the sound we’d recorded had to be re-recorded in a studio. Then agreeing between us all – the final cut of the film, so it took far longer than I had thought to finish the film.

But a long eighteen months on from that first Tweet the finished film was delivered to me.  The first time I watched it as a whole piece and not with bits missing I welled up with tears. Not because of the emotional content of the film, I kind of became numb too that after seeing so many cuts, but for the fact here was something that until a year and a half ago was nothing more than a thought in my head.

This week we have just got the news that we have been shortlisted for the Cardiff Film Festival with Legacy and we keep our fingers crossed for our entries into Brief Encounters and the Leeds International Film Festival.

So that’s it I hear you say, well not quite. 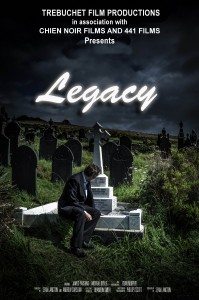 Off the back of Legacy I was asked by Monty Films and Chien Noir Films to Co-Produce another short for them at the end of last year called Ups & Downs.  Which is a film about a dysfunctional single-parent family dealing with a typically troubled teenager and his older brother who has Downs syndrome. As a producer, I was able to engage Bobby Lockwood (Wolfblood, CBBC) and Edward Ashley (Last Tango in Halifax, BBC) to play the two leads in this short

We filmed it over a very cold weekend in Manchester with a full professional crew, the budget was a lot more est. 20k and that doesn’t even touch all the post we had done for free.

That has just come in finished today as I write so will be now entered into film festivals alongside Legacy.

And now I have my own film company Trebuchet Film Productions with an ever-growing slate.  I bought the rights at the beginning of the year to a book called Cowboys Can Fly, which is now in-development alongside another one of my scripts Broken Boys, a horror I hope to option from Frazer Lee

What did I learn? Well you never stop learning that was the big one and next to that ASK if you don’t ask you don’t get and we got a lot of amazing kit and time from some very talented people just because I asked.

And of course get yourself on the Guerilla Filmmakers Masterclass, the best money I’ve spent. A big thanks to Chris and his team.

Thanks Sean, appreciate your sharing your journey.

Get £50 off the two day Guerilla Filmmakers Masterclass with code CHRISJONES (making it £85) www.GuerillaMasterclass.com

What are the five main outcomes for filmmakers attending the Guerilla Filmmakers Mastercla...
Catherine Hardwicke Genesis: How she wrote and directed her first film that led to 'Twilig...
Well that happened...! Blood, guts and glory at Guerilla Film Masterclass
How The Guerilla Filmmakers Masterclass led directly to my first feature film: You can’t c...
Five Important Lessons that I used on my feature film 'The Journey'
Get a job in Hollywood... detailed insight into the dream factory
How To Fund A Film… what our delegates got from it.
How to run auditions for casting your film