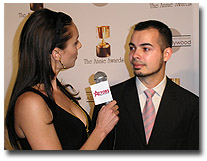 Last week, I asked everyone who reads the blog to watch and vote for a great little animated short film called Sebastian’s Voodoo, as it was playing in the Cannes Short Film Corner (original post and film here). And I just got this email from Joaquin, the film maker…

Thank you so much for helping me with the votes! I was checking the stats on where the views were coming from and there was a huge amount coming from your blog. Thanks dude, really awesome.
Joaquin

Amazing, so your vote really did make a difference, and it proves that as film makers, we are cultivating out audiences and successes by bringing our communities along with us on the journey of our movies. It also proves that we as a group of film makers, can also help each other. It’s so often forgotten in the British film industry, that we are ALL in the same boat. Awesome and well done Joaquin!

Gone Fishing at Rhode Island, the complete Webisodes...
The London Screenwriters’ Festival to receive £42,015 from second round of the Government’...
The Guerilla Guide To Cannes!
Video Postcard from the 50 Kisses Premiere
50 Kisses HUGE Box Office Success... The numbers are in!
We are SOOOO going to need a bigger shelf!
Podcast goes live!

One Response to Cannes Short Film Corner Winner is…