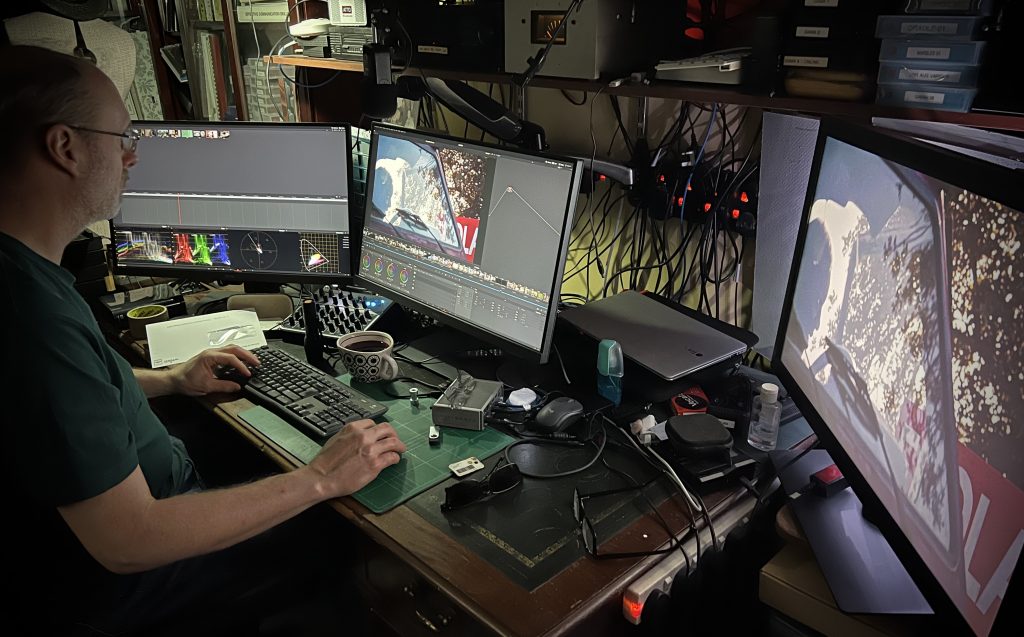 Last week we began the final grade for The Impact.

This is where we adjust colours, contrast and even add subtle visual effects like shadows or flares, to polish the look of all the films.

Aside from the obvious creative element we can address, the grading also helps make the films all look like they belong together. It also ensures that the video levels are ‘legal’ (as in meeting industry specifications).

My old buddy Jon Walker is helping do this and we are using Davinci Resolve.

The post workflow has been challenging for sure as so many films came from different sources, with differing frame rates and editing platforms. We mastered the final edit in Avid and Jon was able to access the media from the Avid project via Resolve. It all works in real time and it’s brilliant to see so many films get that extra sheen, or moodiness, or whatever is needed. Having the films professionally graded is such a bonus.

A few films have been more work than others, like Life’s a Beach which was shot on an iPhone. We ended up going back to the original footage and rebuilding it after we achieved a better frame rate conversion than the one the filmmakers managed (going from 30fps to 25fps). It was kicking every 25 frames or so and now that is smoothed out.

One issue we keep bumping up against is just the quantity of the media. Moving around terabytes of data just takes time. Sometimes a LOT of time. Sometimes it ends up being overnight. It’s one reason I ultimately chose to master in 1080p rather than 4k. The data overhead would just be soul destroying. And remember, many of the films we shot on lower end kit, so the overhead would really not make any difference.


The example above is undgraded on the left and graded on the right. Not all the films needed such a bit grading tweak.

Of course I have already broken some of my own rules.

We shouldn’t really start the grade until the picture is locked – and it was – until I had some ideas about how to include some extra bits. And now I am also dealing with the running time possibly being too long so some further trims may be needed.

One thing shines through though.

It’s an amazing film. It’s quirky, narratively diverse, often profoundly emotional and occasionally laugh out loud funny… most of all, it makes one think about what we have been through and what we are now going through.

I can’t wait to see it on a huge screen and hear on whopping great big speakers. That’s one reason we HAD to do the premiere in person.

PS – Tickets for the premiere are now on sale at www.Impact50film.com

Colour Grading Your Film – Top Nineteen Tips For Working With The Professionals
The Watchers: Our Long Journey Into Space for #Impact50
Want a copy of the Impact50 Poster?
The Impact50 Trailer Has Been Launched… Get involved and make your micro-budget apocalypti...
The Final Draft Meteor Award Has Arrived… and it’s OUT OF THIS WORLD!
Impact50: The Final Cut
Watch the NEW trailer for The Impact and grab your premiere tickets…
Create50: How this all began and the magical throughline of creativity…